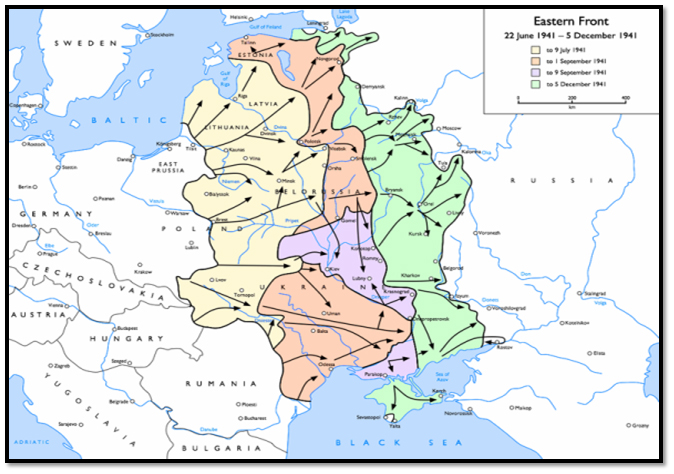 Operation Barbarossa, beginning June 22, 1941, was the code name for Germany’s invasion of the Soviet Union during World War II.  This ambitious operation was driven by Adolf Hitler’s persistent desire to conquer Soviet territories.  Over four million soldiers of the Axis powers invaded the USSR along a 2,900 km (1,800 mi) front, the largest invasion in the history of warfare. In addition to troops, Barbarossa used 600,000 military motor vehicles (tanks, motorcycles, armored cars, self-propelled artillery, half-trucks and assault guns, etc.), military bomber & attack aircrafts and 750,000 horses.  It marked the beginning of a pivotal phase that ultimately decided who would be victorious in World War II. The Nazi invasion of the Soviet Union caused a high rate of fatalities: 95% of all German Army casualties that occurred from 1941 to 1944, and 65% of all Allied military casualties from the entire war. At first, the Nazis won resounding victories and occupied some of the most important economic areas of the Soviet Union, mainly in Ukraine. The Einsatzgruppen special killing squads followed close behind the invading troops. They murdered more than 1.25 million Jews and hundreds of thousands of Soviet nationals, including prisoners of war, in large scale outdoor massacres. Despite their military successes, the Nazi offensive stalled on the outskirts of Moscow in the end of November, 1941. Nazis were not equipped for the Russian brutally cold winter. A Soviet counter offensive pushed the Nazis back before they could take Moscow. The Nazis could no longer mount a simultaneous offensive along the entire strategic Soviet–Axis front, which contributed to their ultimate defeat.