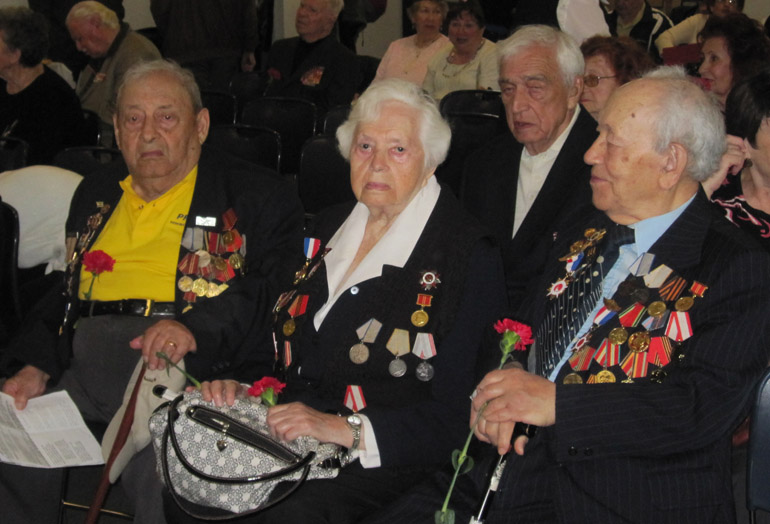 Lyubov Abramovich was from a Jewish family in a small city in Belarus that followed Jewish traditions such as going to synagogue, lighting candles on Friday night, and observing the Sabbath. Lyubov finished high school and married at the age of 19. She had a son and a happy life with her husband until war broke out on June 24.

Nazis entered the city and her home was demolished, they lost everything. Lyubov took her son and ran to a nearby village. Signs were posted that Jews must register and wear yellow stars, it was degrading. 24 days into the occupation, Nazis soldiers went into the houses of Jews and kicked out the young men. The soldiers made them dance and sing Jewish songs, and then they took them into cars and into a forest. There were graves already set up there and 1,200 young Jewish men were killed, including Lyubov’s husband Lazer Volkovich. The Jews lived in a ghetto surrounded by sharp barbed wire. Lyubov’s main priority was obtaining food for her son. When further actions by the Nazis took place, her parents, son, and brother were killed.

Lyubov lost the will to live but agreed with her friends to join the Nazis police for patrol and packing boxes. She took patrons home and one time when many were with her, an SS officer came. He was in charge of the ghetto she was in, everyone knew him, and she was scared. There was an underground group Lyubov was involved in. The group in the ghetto and the Partisans worked together. A few months later when there was another Nazis action occurring, a crying child gave Lyubov and others hiding in her house away. The only thing that saved her from death was that the graves were full. Lyubov eventually left to join the Partisans and she participated in all of their actions, including the bombing in 8 different military operations in the city of Slonim.

An officer by the name of Erin, tortured Lyubov at one point during a Pogrom. He was a professor at a university 30 years after his criminal actions. It took three years of court to finally prosecute Erin. He denied his criminal war actions and lied even though Lyubov saw his SS photos. She participated in the investigation by requesting the original blueprint of a house that proved his crimes. In 1973, his final verdict was a life sentence.