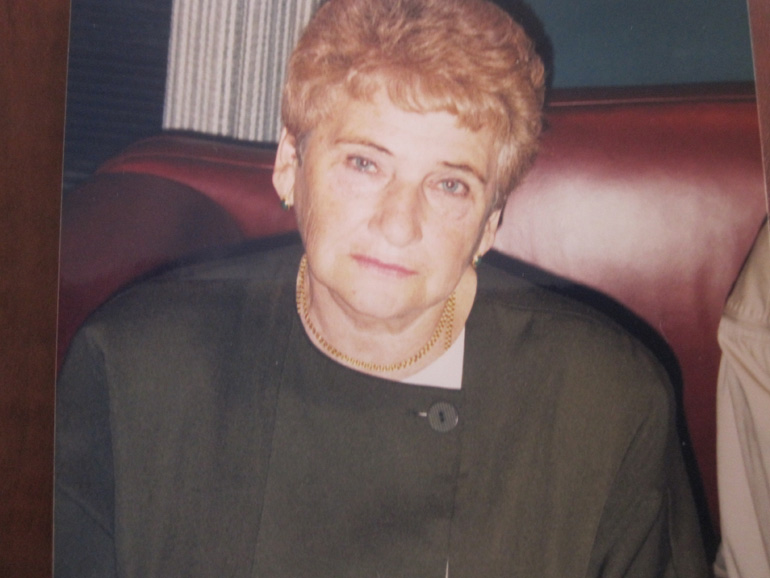 Zhanna was born in Odessa, Ukraine, on September 13, 1930. When WWII broke out, her family was living in Odessa. Her father Semyon Blinshteyn was drafted in the first days of the war. Zhanna’s mother Velya with three children remained in Odessa.

At the beginning of the war, the family lost many relatives. Her grandfather Lazar and uncles Emile and Moshe were burnt in the Odessa Artillery warehouse.  Zhanna’s grandfather’s second wife Tsilya Israelevna and her niece committed suicide. Aunts Zhenya and Anya were shot.

Since January 1942, the family lived in Slobodka ghetto in Odessa which was located in Maritime academy campus. About twice a week transports had been sent from the ghetto to Cloth factory, and then to Berezovka, Mostovoye, Domanyovka, and Bogdanovka where mass executions took place. The main way to survive was to not get transported.

In February 1942, Zhanna with her mother and a three year old sister Fanya got into a transport. Her mother persuaded an officer to let her back into the ghetto to bring Zhanna’s brother. An officer let Zhanna’s mother with little Fanya to go back.  Zhanna was left alone and went with a transport to Cloth factory. She had five deutsche mark in her pocket which she gave to a Russian woman, a borscht seller, who came to the factory. Zhanna knew this woman and the woman knew Zhanna’s family. She hid Zhanna under her shawl and brought her back into the ghetto where Zhanna got reunited with her family.

A typhus epidemic broke out in the ghetto in winter and quarantine was declared. Zhanna and her brother got sick and this is why they left the ghetto with the last transport in June 1942.

People were shipped in cattle cars to Berezovka and from there sent on foot to Mostovoye where Jews were to be shot by German colonists. However, this day happened to be a Christian holiday, and the colonists were busy celebrating. So everybody had been sent to Domanyovka.

Zhanna’s brother Nyuma carried little Fanya on his shoulders. Anyone who fell behind was shot right away. In Domanyovka people were ordered to leave little children in a local school building. Zhanna’s mother left her little daughter Fanya there. However, Fanya somehow managed to open a huge school door and tried to walk back to her mom. Then Nyuma walked back and stood next to his little sister at the school porch, and Zhanna and her mother rushed there too. After that all other mothers joined them. This had shocked a Romanian officer in charge of the selection and he let everyone take their children back.

After this everybody was sent to different farms to perform hard agricultural labor. Zhanna’s family lived in appalling and unsanitary conditions; they starved and had to panhandle to survive. The most horrible place the family had been sent to was the farm of a one eyed German named Fiter. They lived in pigsty’s pens; the family lived at one side of the pigsty and huge pigs lived at the other side. Once Fiter started beating Zhanna’s brother with a catttle whip, she fainted unable to watch. Afterwards they were transferred to another farm – Gorodok. The winter of 1942-43 was very cold and Zhanna had no footwear, so she walked barefoot for most of the journey. In Gorodok the family had been placed in the death barrack. Those who survived settled along one wall and the dying and the dead along the other wall. Zhanna’s family got no wall place; they lived all winter on the floor in the middle of the barrack.

The law of surviving was to get up in the morning even though there was nothing to look forward to and it was freezing cold. In the morning Zhanna would squat to stay warm and she managed to learn to move while squatting. She sat this way for many weeks, and as a result her skin fused and Zhanna could not stand up at all. Her brother Nyuma threw her out on the snow. It was very cold, so she stood up tearing the skin on her legs; the scars did not heal for many years.

In the winter of 1944, Romanian troops retreated followed by retreating Germans. Then came the Kalmyk regiments and after them Vlasov army which soldiers were supposed to shoot remaining Jews. However, several Jewish women persuaded them not to. Instead Vlasov soldiers set the barrack on fire, but had done so improperly. They did not lock the door and luckily it started raining. Zhanna got carbon monoxide poisoning; other survivors dragged her out into the fresh air and placed potato slices on her eyes.

On March 28, 1944 all Domanevka area camps were liberated.  Retreating Germans took all men with them, including Zhanna’s brother. However, he managed to escape and the whole family returned to Odessa. Soon Zhanna’s brother left for the front and was killed in Poland on January 19, 1945. Zhanna’s father, badly wounded, returned after the war ended.

In 1989, Zhanna, her daughter, and grandchildren immigrated to the United States. For five years, Zhanna had been Vice President of the Association of the Holocaust Survivors from the Former Soviet Union. In 1996 with the help of the American Red Cross, Zhanna found her brother’s grave at the military cemetery in the city of Pultusk, not far from Warsaw. She was fortunate to meet two remarkable people: Jack Goldfarb, an American Jew, and his Polish friend Jacek Rochacki, who helped her to place a tombstone. In 2002 Zhanna and her family went to Poland to visit her brother’s grave.