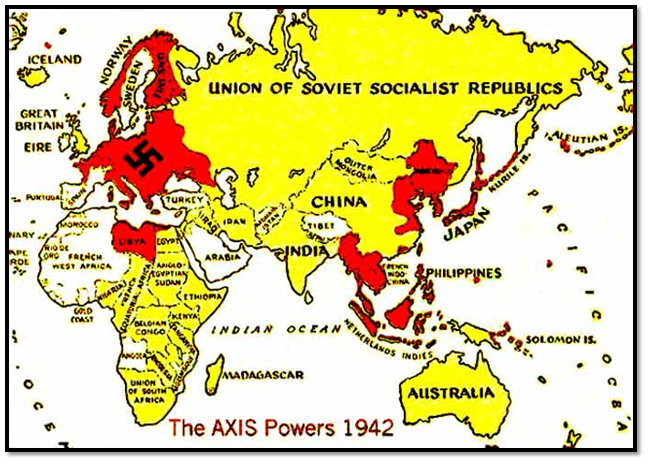 During World War II, there were two sides that you could be on: the Axis or the Allies. Before and during WWII, the name “Axis Powers” was the name given to the alliance of Germany, Italy, and Japan (the three major Axis Powers), which then later came to include Romania, Bulgaria, and Hungary. At their peak of power, the Axis powers ruled empires that controlled large parts of Europe, Africa, East and Southeast Asia and the Pacific Ocean.

The alliance that was headed by Germany, Italy, and Japan (leaders Adolf Hitler and Italian Prime Minister Benito Mussolini) opposed the Allied powers (United States, France, Great Britain, and Soviet Russia) in World War II. The Axis partners had two common interests– expansion of their territory and the overthrow of the post-WWI order; and the destruction or neutralization of Soviet Communism.

Japan in the East wanted China’s natural resources. They had the military and economic strength, and the only thing stopping them was the colonial powers and the United States. This gave them a strong dislike towards the soon to be Allied Powers. After the Japanese invaded Manchuria in 1931 and declared war on China in 1937, they gained friendship with the Germans. Eventually, these three nations became allies and formed the Axis powers (named after the Rome-Berlin Axis). They fought the democratic nations of the Allied Powers and the ambitious Soviet Union.