‘I Want to Kiss America’: A Woman Who Fled Nazis, Then Russia, Makes a Life in Brooklyn

Home  /  News  /  ‘I Want to Kiss America’: A Woman Who Fled Nazis, Then Russia, Makes a Life in Brooklyn 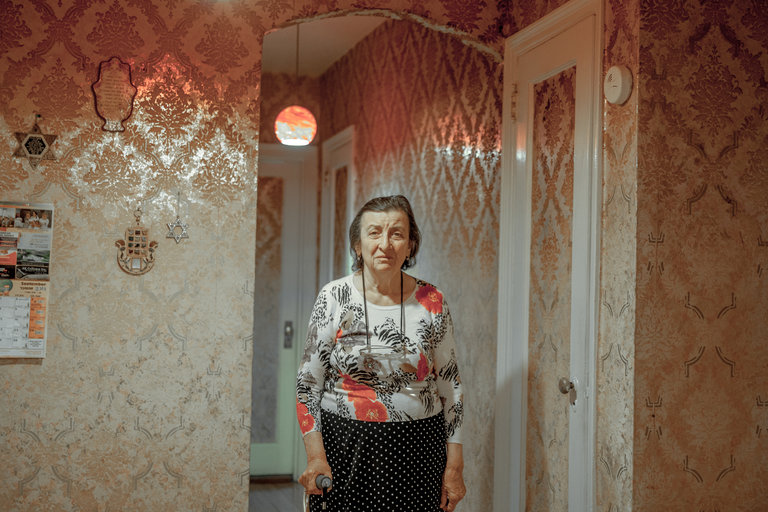 This week, the New York Times featured an article highlighting the impact of the work of the Marks JCH on the life of a Holocaust survivor living alone in south Brooklyn.

As you’ll see, the story as published in the Times details some of the work of the “J” in helping to support Polina, an 78-year old émigré living alone in south Brooklyn. This special edition of Impact 360 shares the fuller scope of our work with Polina not contained in the article, painting a richer picture of just how much the “J” has been able to help Polina and others like her, thanks to your support. Unlike many of our elderly clients, Polina only came to the “J” 3 years ago seeking our help. Referred by her cousin Svetlana, who has been involved with the “J” as a peer leader of a group for Jews from the Caucuses mountains, Polina had been reluctant to seek help, priding herself on her ability to get by on limited fixed income and support from among her 3 adult children. Polina’s children helped her to the best of their ability, until one got a divorce and struggled to make ends meet supporting her own child as a single parent, and another got into a car accident and had to stop working, relying on disability income to support herself, and then, Hurricane Sandy hit, causing the third child’s ability to help Polina to stop immediately, as he lost his business in Staten Island following the overwhelming flood waters. Polina’s son has since found work as a driver for an adult day care center, but with two teenage children of his own to support, his limited income as a driver leaves him unable to help Polina as he once had.

Polina first arrived at the “J” in December of 2013, unable to pay her monthly rent and utilities as a result of the decline in her children’s ability to help, just over one year after Hurricane Sandy hit. Following initial assessment provided by our social workers, the J team created a plan for intervention. Polina was quickly enrolled in the agency’s emergency cash assistance program. Since 2013, Marks JCH has been providing periodic assistance with rent subsidies and utility bill payments to prevent Polina from falling further behind with her monthly expenses. Through our comprehensive case management system, Marks JCH has continued to monitored Polina’s needs. She has been receiving weekly reassurance phone calls, and home visits from our social worker. The J’s ongoing support has become a lifeline for Polina. She continues to express her appreciation for our help in her times of need, and graciously accepted our invitation to share her story with the New York Times in the interest of helping others who are in greater need of assistance today than when they first arrived in this country.

Some of the story of Polina’s youth is detailed in the article, and like so many others we are privileged to help, Polina has so many more stories about her family’s legacy lost to Communism, anti-Semitism and the trauma of emigration. Her father was a rabbi. He died at the young age of 64, two months after he was attacked by anti-Semitic neighbors in response to his efforts to organize the Jews in their town to build a fence in order to maintain the sanctity of their local Jewish cemetery. His name was Pesach, which is the Hebrew word for the holiday of Passover, as he was born during the holiday that celebrates our people’s liberation from bondage. He changed his name to Peter during the war as a result of the family’s internal displacement and experience of anti-Semitism. Polina’s connection to her Jewish heritage and to her father has stayed with her all these years; as pictured in the article, she keeps Jewish books on her bedside table as a reminder of her family’s legacy and roots.

When our staff member Luba called Polina to tell her that the article was featured in the newspaper this week, Polina first called her children to tell them to go out and buy copies of the paper, and then called Luba back, worried that people might read her story and send her money directly, jeopardizing her receipt of Supplemental Security Income. Luba assured Polina that any assistance received on her behalf would be handled in the way we have helped others in the past, ensuring their ability to maintain eligibility for the benefits that help to sustain them in the long-term.

It is always a privilege to do the sacred work of the “J”, and in seeing the impact of our work on Polina’s life through the New York Times article, we are reminded why we must continue to do what we do each day. Special thanks to UJA-Federation of new York for continuing to solicit stories from the “J” in their efforts to help raise funds for and awareness about the depth of need among our community members and clients.

Here’s the link to the story: ‘I Want to Kiss America’: A Woman Who Fled Nazis, Then Russia, Makes a Life in Brooklyn’

Our thanks to the Carl Marks Family Foundation/Community Support Fund, the Cary Davis & Jon McGinn Charitable Fund, the Claims Conference, and the Robert Ivker Nazi Victim Fund, as well as the New York Times Neediest Cases Fund (via UJA-Federation), for broadening our capacity to provide emergency cash assistance to members of our community during times of crisis.