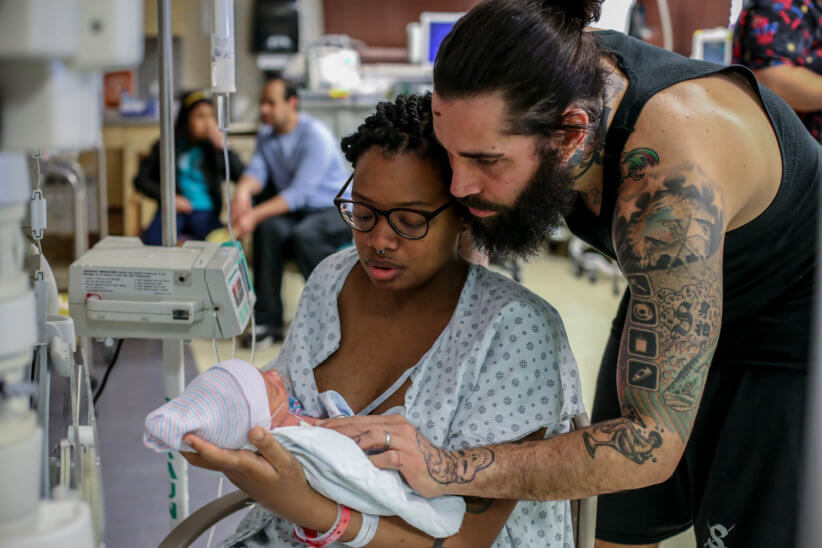 (Original can be found here: https://www.newyorkfamily.com/ode-to-neonatal-intensive-care-unit-parents-new-york/)

Parents of babies who have a stay in the neonatal intensive care unit (NICU) face a higher risk of developing perinatal mood disorders (PMADs), like anxiety and depression, and they may be at greater risk for post-traumatic stress disorder (PTSD).

Evelyn, an NYC-based psychotherapist who specializes in perinatal wellness, knows first-hand how challenging life for NICU parents can be. She has supported plenty of clients whose babies came earlier than expected. It was only when her own son was born at 26 weeks that she began to understand the heartache and strength it takes to be a NICU parent.

Henry weighed one pound and ten ounces when he was born and spent a total of 121 days in the NICU.

“The first few days were pure grief,” said Evelyn. “Then, guilt. All I could think was, ‘Why did my body do this? What happened here is my fault.” There are so many moments of uncertainty, worry, and the unknown for a new family with a baby in the NICU. There is also something else: Resilience. Resilience can be the glue that holds a new family together during such a scary and delicate time.

Resilience doesn’t look the same for every family. For Evelyn and her husband, Bryce, they went into what Evelyn calls “doer mode.”

Her world got small. She shut out anything that didn’t immediately have to do with her kids. She poured herself into pumping, visiting Henry as often as possible, and keeping up a routine with her oldest son, James. This was the best way she knew how to be fully present for her baby,

Acceptance was also key for Evelyn.

“Acceptance helped us keep going. Whenever we got fresh news, it brought up a rollercoaster of emotions all over again. First, grief, then being angry and then being present again,” said Evelyn. For Belinda and Bryan, they found their coping strategy to be something entirely different. After several unsatisfactory appointments with an obstetrician earlier in their pregnancy, they decided on a homebirth and hired homebirth midwives. At 38 weeks, after a visit to the hospital to monitor Belinda, the couple were told their son’s heartbeat was decelerating. They went home to consult with their midwife and did everything they could to try and go into labor spontaneously. After some time, their midwife gave them the same news: their unborn baby’s heartbeat was decelerating.

They checked back into the hospital. Because they had planned a homebirth, they had no prior knowledge of labor and delivery in a hospital setting. Belinda recalls that the staff was not compassionate to her or Bryan. They ignored most of her questions, didn’t explain things to her husband when he would ask for clarification, disregarded their requests for a more gentle birth plan, and never told them what was actually going on with their baby. Many of the procedures she received were not discussed or consented to. Belinda and Bryan felt vulnerable and did not trust that the staff would be any more helpful or volunteer any information. In what was already a profoundly confusing time, Belinda had to make an incredible effort to advocate for herself and her baby.

It wasn’t until 18 hours after the birth of her son that she had any information from the medical staff about what was going on. Her son was in NICU, and it was unclear how long he would stay. In spite of hazy protocol, she demanded to see him.

In the end, Baloo spent a total of nine days in the NICU due to blood sugar issues. Many times, she recounts, they were the only parents in the NICU. Parents of other fragile babies had no choice but to go back to work, and some babies were visited only by social services personnel.

“Resilience for us was defiance. We knew we needed to get out of there, no matter what. We’re leaving together, all three of us,” said Belinda of her strategy. “It’s exhausting when you set up your world like that, it’s tiring.” For Stephanie, the circumstances of her baby’s NICU stay were known in advance. After years of trying to conceive and multiple attempts at IVF, Stephanie and Greg were pregnant with twins. Things changed abruptly when they found out their twin girls had Twin-to-Twin Transfusion syndrome, a significant complication wherein the twins share a placenta. They underwent a procedure, which unfortunately resulted in devastating news, Emmy, one of the twins, did not make it.

Then, as a result of the procedure, Stephanie’s water broke. She was only in her second trimester. Stephanie was admitted to the hospital and spent 11 weeks under observation in the antepartum unit.

The plan was for Stephanie to give birth at 33 weeks, and she knew that NICU was a given. Yet, according to Stephanie, it wasn’t just the prior knowledge that she found to be a source of comfort. Instead, she relied heavily on a community of parents who had been in similar circumstances.

An already social person, Stephanie joined several Facebook groups of parents who experienced Preterm Premature Rupture of Membranes and TTTS. She posted there and on her social media accounts. She would ask questions and get feedback from people who had lived this experience. In an unprecedented time in her life, instead of shutting down, Stephanie opened up. She made mom friends in the groups and in the antepartum unit, friends that she keeps up with regularly to this day. After her baby Mollie was born, Stephanie continued to rely on internet communities, friends, NICU staff, and other mothers in the NICU for guidance and support. Her daughter spent two weeks in the NICU. During that time, she struggled with recovery, pumping, mastitis, and visiting Mollie daily.

“Nothing can prepare you, but knowing ahead of time helped find the resources I needed,” said Stephanie. “The other hard part is to make sure you’re eating and taking care of yourself. You have to get up for a bit, go downstairs and get some air. You have to figure out how other people can help you, how they can support you, like get you food or remind you to take a shower.”

All three mothers said that knowing information about their child’s clinical condition and what to expect next is crucial.

“I wanted to know what my rights were and what are some hacks here to help me get through this,” said Belinda.

Evelyn would get to the hospital as frequently as possible she didn’t miss the neonatologists and pediatricians doing rounds. Stephanie had a notebook with her at every visit, writing every detail she could down and leaving questions for the nurses.

All three mothers also did their best just to be new moms. Evelyn read books to Henry and sang songs to him. Stephanie received a care package from a NICU awareness and support organization called Today is a Good Day, which provided a journal, hand-knit baby items like a blanket, and other useful things to help her normalize Mollie’s NICU stay. Belinda talked to her son and sat with him doing skin-to-skin as often as possible.

For all three mothers, the residual effects of life after the NICU exist. They range from a completely new and learned understanding of what patient advocacy really means to hosting in-person support groups for parents of babies with special needs or even continuing a strong presence online for any other expecting parents with babies in the NICU. And while resilience or coping looks entirely different for everyone, the ability to be present from day-to-day in the NICU takes an enormous amount of strength, courage, and grit, even if it doesn’t feel like it at the time.

Today is a Good Day