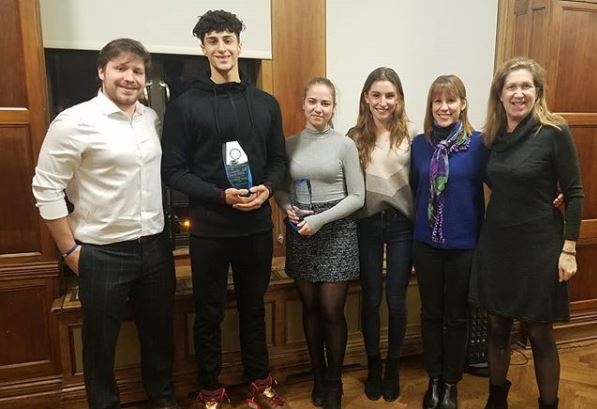 Introducing our newest 2018 Glenn Markman MVP Award winners, Yulia Rakova and Gabriel Rafailov, both of whom were selected for their demonstrated leadership on the court and off.

Three years ago, we had the immense privilege of establishing our Annual Glenn Markman MVP Award to honor the memory of our fellow board of directors’ member, friend and true JCH legend – Glenn Markman. Through the Markman MVP award we have been able to capture Glenn’s passion and love of basketball at the JCH by recognizing outstanding young athletes in our community.

Yulia was born in Tashkent, Uzbekistan and her family immigrated to the states in 2005 when Julia was just 4 years old. Almost immediately, her parents signed her up for the JCH day camp which she attended for the next 8 years. Yulia’s passion for volleyball also began at the JCH Cammarata Youth Sports Center. Yulia worked her way from JCH beginner volleyball classes which she began in fifth grade to competing and leading our GEVA and Maccabi teams. In 2017, Yulia was on the JCH Maccabi team, which earned a silver medal, and in 2018, Yulia served as a captain, leading our team in the Orange County Maccabi games where she was awarded the Midot Medal for leadership. Yulia is finishing her senior year at Brooklyn Technical High School, studying chemical engineering which she hopes to purse at MIT upon graduation. In addition to her busy academic schedule and volleyball leadership at the JCH, Yulia is also on the Brooklyn Technical High School varsity team as a starting setter, and has received MVP and Coach Awards both in her freshman and junior years. Yulia is as committed off the court as she is on it to both her studies and community involvement at the JCH. Yulia teaches our children’s volleyball classes in our Sunday Academy program and is a supportive teammate and role model to younger volleyball players, her peers, and coaches.

Gabriel’s family settled just 3 blocks from the JCH when they emigrated from Azerbaijan and enrolled Gabriel in almost every program and activity the JCH offered. Gabriel met his best friends and basketball teammates over the many years he attended the Marks JCH Day Camp and Camp B’Yachad. Gabriel credits his love and passion for basketball to all the hours he spent playing in the JCH gym with his friends and fellow campers. Currently in his senior year at FDR High School, Gabriel has led his school’s basketball team for the last three years, in addition to joining JCH basketball classes and competitive leagues in the JCH Cammarata Youth Sports Center. While busy applying for colleges for the upcoming year, hoping to study business, Gabriel has spent the last two summers working as a camp counselor in the Marks JCH Day Camp, sharing his passion for community and basketball with our youngest campers as well as being one of our most active teen volunteers.

We were pleased to hear Yulia and Gabriel speak about their admiration and gratitude to the support and guidance they have received from their coaches Joseph Agrest, JCH athletics director, and Yakov Bilik, basketball coach. Joseph and Yakov continue the great tradition of JCH coaches raising and guiding hundreds of young athletes over the many decades of their time with the Marks JCH.